Bird of Paradise on Yupo

Background was applied and and then image was drawn, lifted with a clean brush, and then painted. A fun project! I got the idea from Jean Haines video lesson: dab one pigment on a corner and another pigment on the opposite corner, wet and smear with a brush, let dry and then let the background speak to me about what photo ref would work best. A fun, get-the-creative-juices-flowing exercise! I'll do more of these!! 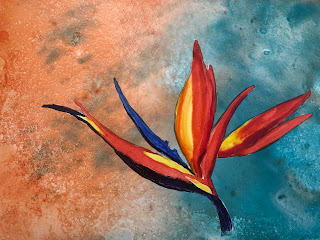 Posted by Brenda Yarborough at 7:11 AM No comments:

These weekly classes have been GREAT! Sandy is such a tremendous, encouraging teacher and we have worked on substrates I've never tried. . .like black cotton rag! I have a nice set of Daniel Smith Interference and Pearlescent paints and was underwhelmed by them on white paper. . .on black paper, it's magical!! LOVE these paints and love the option of black paper! 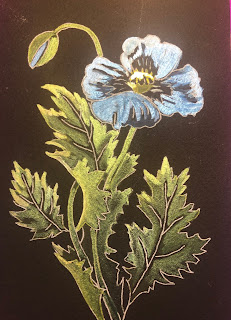 I wash hitting a wall with my daily sketch/watercolor work. . things just weren't flowing right! The "fix it" was getting back to Yupo (which truly is the best substrate for me to loosen up). Here are 2 Yupo pieces from class. 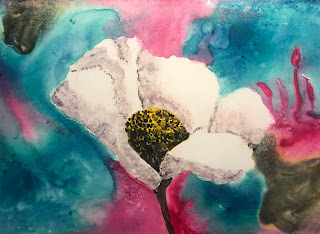 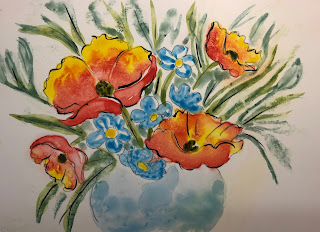 Posted by Brenda Yarborough at 8:15 AM No comments:

I'm taking a few Zoom classes from Sandy Sandy and also have been sketching/painting on her Drawing Everyday group challenge for June. At the end of June, I'll post some of the daily pieces. Here are some of the Zoom lessons and practices, all done on Yupo. 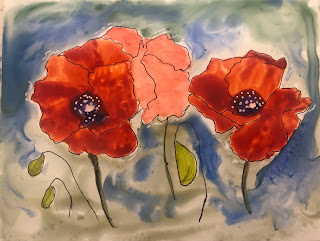 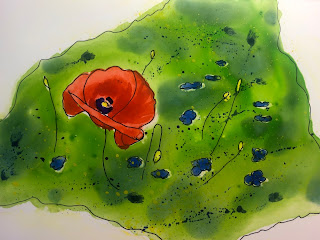 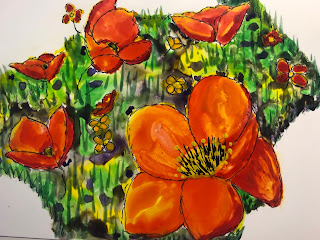 Posted by Brenda Yarborough at 8:58 AM No comments:

The End of a Very Long Dryspell

Eight years. . . I haven't held a paintbrush in 8 years! Some people work through emotional trials by delving into their art more, it's an outlet for them. I was the opposite. I instantly had no desire to paint. I waited 2 years before I felt like I wasn't going to ever paint again, but wasn't ready to get rid of my supplies, so I packed them up into storage boxes. A couple of weeks ago, I unpacked the watercolor supplies after experiencing strong urges to paint again.

February 15, 2012, my 4-year old granddaughter was diagnosed with kidney cancer (Wilm's Tumor). The next morning she had surgery to remove the tumor, there weren't even kidney cells present, the tumor had completely consumed one kidney. Katie weighed 32 lbs and the tumor weighed 2 lbs!! It was stage 3. The biopsies of surrounding tissue and lymph nodes came back negative, otherwise it would have been stage 4. Two days after surgery, she started aggressive chemo.

I am a Christian with a large network of praying believers. What I experienced over the next several months was nothing short of miraculous. The Lord held us all up and filled us with a grace and peace that truly surpassed all understanding.

Six weeks after Katie's diagnosis and surgery, while she was still undergoing chemo, my mother was hospitalized and subsequently passed away. To say that I've lost a lot of memory from Spring 2012 until Spring of 2013 is an understatement. And with all the good news of Katie's recovery and defeat of cancer, I still didn't have desire for art.

Six months after aggressive chemo, Katie was finished with her treatments. After her post-treatment physical, her doctor said, "There is no scientific explanation for the lack of side effects from this type of chemo, this is a God miracle." Katie is now 12 years old, only has to go in for cancer screens every other year now and the results have consistently been the same, "no cancer cells."

Today marks about 3 weeks since I unpacked my watercolor supplies (the oil supplies are still in storage). I dug out some of my art books, viewed some video instruction on Artist Network, and found a couple of good art groups on Facebook. It was through one of those groups that I found Sandy Sandy and her online Zoom classes! I am obsessed with art again!! I'm so thankful!!

In the past I had a tendency to paint too tight, I don't want to repeat those same mistakes and so I decided to start back up working primarily with watercolor on Yupo. I used one of Terry Harrison's books to paint a blue door on watercolor paper, and then followed up by painting the same exercise on Yupo, here it is. 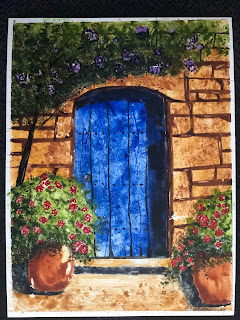 Rock Creek in Valyermo, a photo by BYarborough on Flickr.

9 x 12 water mixable oils on canvas panel. Plein air class this morning was in Valyermo. The fall colors are almost gone. It was cool, then nice when the sun came out, then cool again when the sun moved and we were in shade! When we stopped here, there was a doe getting a drink, she bounded back up into the mountains. A hawk flew over a couple of times. So cool to be out and see the wildlife!

Posted by Brenda Yarborough at 1:51 PM No comments:

Poplar among Cottonwood, a photo by BYarborough on Flickr.

12 x 12 Canvas wrapped board, using Cobra water mixable oils. Painted en plein air off road near Valyermo.It was a beautiful day for painting, the sun was shining, and the weather was mildly warm for late fall. It had been a couple of months since I'd painted, felt SO GOOD!

Posted by Brenda Yarborough at 5:30 PM No comments:

Small Wash Picnic, a photo by BYarborough on Flickr.

Yesterday Mike had the idea to pack up a picnic lunch and head up over the hills above our house. It had been too long since I'd had time to paint, so I immediately jumped up and had my plein air gear ready to go in about 2 minutes! I don't normally paint small, but decided on a 6 x 8 panel. This is done with WMO (Cobra) oils. It was 1 p.m., so not the prime lighting time for painting, but I take what I can get. LOL!